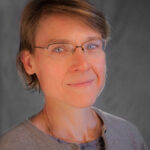 Nan Evans of KPTZ and geologist Marcia Bjornerud (Lawerence University, Wisconsin) discuss how thinking about time like a geologist can help save the world. This interview is in advance of Marcia’s hour-long lecture for the Quimper Geological Society on Sat. Dec. 10 at 4 pm (use the QGS link to hear the free public lecture).

The interview is for Nature Now, a weekly radio broadcast on KPTZ 91.9 MHz. :

The recorded broadcast will be available later on KPTZ’s Nature Now page. 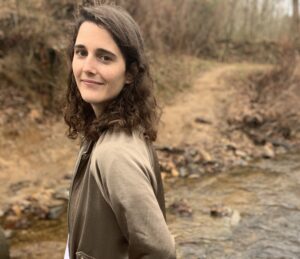 The role of oceanic plateau collision in the geologic development of the Olympic Peninsula: testing geologic connection between Wrangell-St. Elias (AK) and Olympic (WA) National Parks. 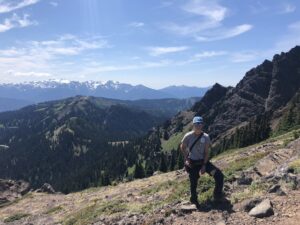 The Pacific Northwest (PNW) has a long geologic history of seismic activity. Recent studies suggest the PNW experienced a collision ~50 million years ago (Ma, early Eocene) which resulted in an enormous oceanic plateau attaching itself to the west margin of the continent. That plateau is known fondly, as Siletzia.

On October 15, 2022, Erin Donaghy discussed what occurred after the accretion of Siletzia. She described the interbedded siltstone and sandstone turbidites in the deep marine environment. These rock strata are known as the peripheral sequence of the Olympic Peninsula and are thought to be part of the regional Tofino-Juan de Fuca forearc basin. These strata are divided into two distinct sections by the Lower Elwha fault (hanging wall = basalts (Silezia) and overlying sedimentary rocks; footwall = younger (Eocene to Miocene peripheral rocks). She explained how the correlation of Eocene deposits on the north side of the Olympic Peninsula and those on the south side is still not firmly established.

Erin and colleagues have been using new mapping and zircon geochronology of the north Olympics’ Blue Mountain Unit (BMU) to re-evaluate the basin formation in the context of Siletzia accretion. She explained how these new data suggest that continentally derived sediment flooded into the basin immediately before and after a major period of basaltic volcanism. Erin provided new interpretations of how the BMU reflects a period of marginal rifting after accretion. She also discussed the depositional setting for the Aldwell, Hoko River, and Makah Formations, which are younger than the docking event of Siletzia.

Erin and colleagues conducted more sampling this past summer (2022) in Wrangell-St. Elias National Park, AK, and the Olympic National Park, WA (September 2022). Ongoing high-precision uranium-lead zircon geochronology of interbedded volcanic rocks will provide more precise depositional ages for the sequences. Geologists think the Yakutat terrane, currently colliding with southeastern Alaska, may have originated as part of the Siletzia plateau offshore the PNW. She discussed the significance of the changing provenance of Eocene sedimentary rocks in the Tofino-Juan de Fuca basin within the context of a rifting oceanic plateau, migrating triple-junctions, and the possible northward translation of the Yakutat terrane during this time. 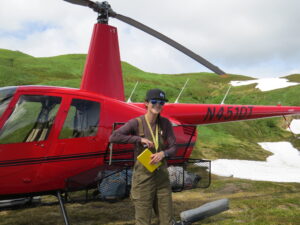 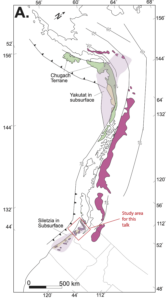 Erin Donaghy is a sedimentologist and field geologist interested in studying basins that form along active convergent margins.

2012 – B.S. in Geology, Bucknell University (Lewisburg, PA); her initial interests included environmental geology and did aqueous geochemistry, before switching to Geology and wrote a thesis in sedimentology with Dr. Jeff Trop.

2015 – M.S. degree in Geology, Northern Arizona University (Flagstaff, AZ); she worked with Dr. Paul Umhoefer and studied the Eocene basin evolution of the Chumstick basin in central Washington. During graduate school she took time off to complete an internship with ConocoPhillips in Anchorage, AK and studied the structural and depositional evolution of basins offshore of the North Slope.

She then gained three years of professional experience as an exploration geologist in the energy industry, providing her the opportunity to study basins around the world. This included Deepwater Gulf of Mexico Exploration and Operated Wells, and the Global New Ventures Conventional teams.

current – PhD, Purdue University, Department of Earth, Atmospheric, and Planetary Sciences (West Lafayette, IN); her passion for teaching, mentoring, and research drove her to return to graduate school in Geology. Erin works with Dr. Michael Eddy and Dr. Kenneth Ridgway and uses the sedimentary record to tackle large-scale tectonic questions. She integrates both traditional field mapping methods and analytical methods in my research to constrain the temporal and lateral variations in depositional environments and provenance within sedimentary basins. This helps her piece together a detailed basin history in context of high-precision chronostratigraphy. She skillfully involves numerous undergraduates in both field and analytical lab work and mentored them through individual research projects where they have the opportunity to present at national level conferences.

Erin is well published, a great speaker, and is a geologist to follow into the future! 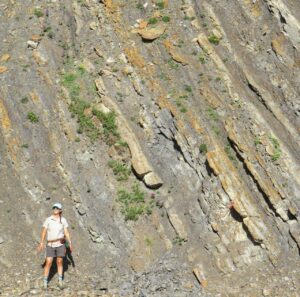 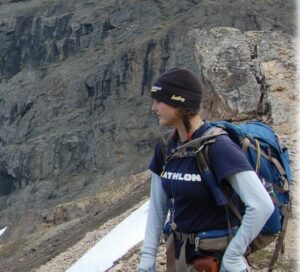 Nan Evans of KPTZ and local geologists, Jeff Tepper and Michael Machette, explore two significant rocky outcrops in Eastern Jefferson County – Tamanowas Rock and Peregrine Rocks, both just northwest of Chimacum.  To download the field trip guide that this interview was based on, click here.

The interview is for Nature Now, a weekly radio broadcast on KPTZ 91.9 MHz. Because Nan got so many interesting tidbits, the interview will be broadcast in two parts and each will be recorded as MP3s and be available if you can’t hear the broadcasts:

Listen in to learn how Tamanowas Rock was formed, what it can tell us about the ancient landscape of our region, why Tamanowas Rock is important to indigenous peoples, and what is being done to protect it. The recorded broadcast is available on  KPTZ’s Nature Now page.

Exploring Peregrine Rock, a glacial erratic, gives listeners a chance to consider the impacts of glaciation on Eastern Jefferson County and to ask just where did the rock come from and how did it get here?