NOTE. We started offering zoom video of our online (Zoom) lectures in the Spring of 2020.  To see all of the listings, click here.  Otherwise select and start one of the lectures shown below. 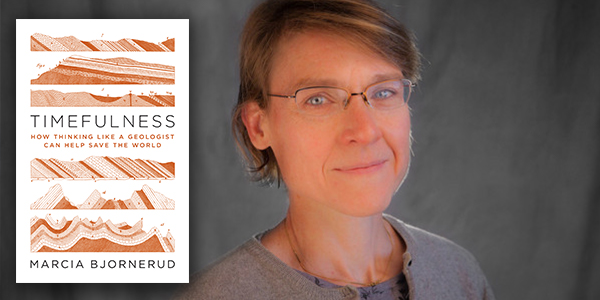 The Lecture Developing and calibrating the geologic timescale — reconstructing Earth’s past from the raw rock record — is one of humanity’s greatest, but least appreciated, intellectual achievements.   But as a society, we are time illiterate, lacking a sense for the durations of the chapters in Earth’s history, the rates of change during previous intervals of climate instability, and the intrinsic timescales of ‘natural capital’ like groundwater systems.  This matters because environmental wrongs, social conflicts and existential malaise are all rooted in a distorted sense of humanity’s place in the history of the natural world.  Thinking like a geologist can… Read more2022-12-10 Marcia Bjornerud – Timefulness 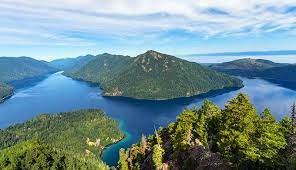 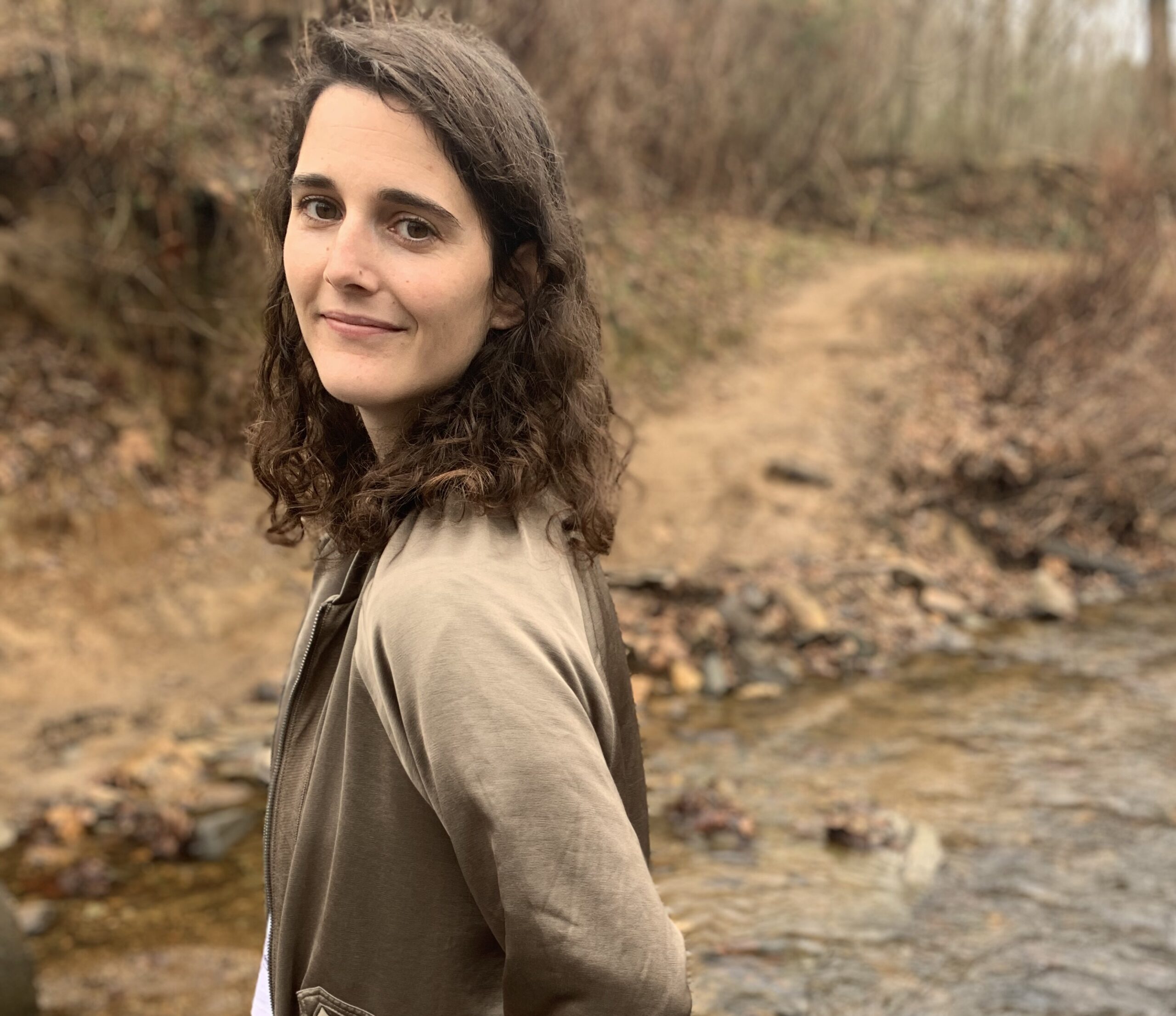 The role of oceanic plateau collision in the geologic development of the Olympic Peninsula: testing geologic connection between Wrangell-St. Elias (AK) and Olympic (WA) National Parks. The Pacific Northwest (PNW) has a long geologic history of seismic activity. Recent studies suggest the PNW experienced a collision ~50 million years ago (Ma, early Eocene) which resulted in an enormous oceanic plateau attaching itself to the west margin of the continent. That plateau is known fondly, as Siletzia. On October 15, 2022, Erin Donaghy discussed what occurred after the accretion of Siletzia. She described the interbedded siltstone and sandstone turbidites in the… Read more2022-10-15 Erin Donaghy, Revisiting stratigraphy of the Eocene to Miocene sedimentary peripheral rocks on the Olympic Peninsula, Washington 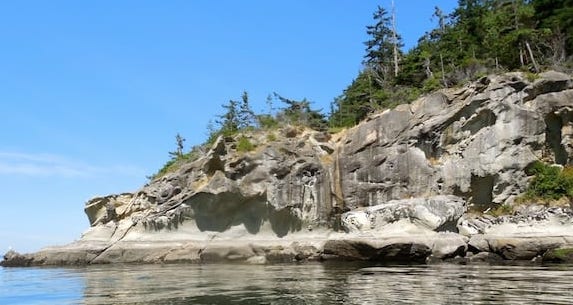 Washington’s fossil footprints—Tracking birds and beasts of a bygone era   The Lecture The Chuckanut Formation is one of North America’s thickest sequences of non-marine sediment.  It was deposited by a meandering river that flowed westward across Washington at a time when the Cascade Range had not yet been created. The strata accumulated to a thickness of at least 6,000 meters (20,000 ft). The oldest beds were deposited in the late Paleocene, but most deposition occurred in the early Eocene. The warm early Cenozoic climate allowed subtropical rainforests to flourish. Abundant plant fossils in the Chuckanut include fronds from palms,… Read more2022-05-14 George Mustoe, WWU Bellingham:  The Chuckanut—Not just another good brewpub

The Battle for the Abyss:  Mining, conservation, and bioprospecting interests square off on the deep sea The Lecture Nearly 60% of the surface of our planet is covered by more than 2000 m of water. The deep seabed is the largest and least explored ecological region on Earth. With no light for photosynthesis, this cold high-pressure environment is a food desert, with most organisms feeding on organic debris that sinks from the surface ocean. Yet, there are an estimated 500,000 or more species in the deep sea, many of which occur nowhere else. The abyss has seen relatively little disturbance… Read more2022-04-02 Kim Juniper, Univ. of Victoria: The Battle for the Abyss

The Lecture On Saturday February 19, geologist and photographer Marli Miller spoke about the geology of Oregon and Washington as seen along our federal and state highways as outlined in her recent Roadside Geology books.  With its spectacular mountain ranges, lush valleys and awesome rivers, the Pacific Northwest landscape offers an incredible geologic story grounded in continental accretion and mountain-building, magmatism, and glaciation. Beginning with the Crescent Terrane (Siletzia), the latest addition to North America, she described elements of continental accretion that form the underlying but diverse basement of the region, followed by a photographic “roadtrip” up the Columbia Gorge… Read more2022-02-19 Marli Miller, University of Oregon — Roadside Geology of Washington

The Lecture Nevado del Ruiz (Colombia) and Mount Rainier (US) exist a hemisphere apart, but they both project similar hazards for communities downstream.  Central to their stories is the development and continued presence of weak and collapse-prone hydrothermally altered rock, and perennial covers of glacier ice and snow. Slopes of both volcanos are mantled by loose rock debris that can be remobilized to initiate lahars. At both volcanoes, five major glaciofluvial rivers flow down narrow valleys to lowland areas that support large human populations. More than a 150,000 persons live in areas at risk of lahars that could emanate from Rainier.  Thirty-six… Read more2022-01-08 Carolyn Driedger, USGS—Hazards from the Nevado del Ruiz and Mount Rainier volcanoes

2021-11-20 Doug Clark, WWU— Under Ice and Under Water: New Constraints on the Final Advance of the Cordilleran Ice Sheet in Northwest Washington

On Sat. Nov. 20, 2021, Doug Clark, Professor of Geology at WWU, Bellingham presented Lidar data and new stratigraphic, lake sediment, and radiocarbon constraints shed new light a long-standing dispute about the timing and nature of the last major events of the Cordilleran ice sheet in the Fraser Lowland. These new data paint a remarkable picture of glacier advances and retreats interleaved with rises and falls of local sea level during the closing phases of the Pleistocene ice age.  Following its initial retreat from the Puget Sound, the ice sheet briefly readvanced into the Salish Sea near Bellingham, Washington… Read more2021-11-20 Doug Clark, WWU— Under Ice and Under Water: New Constraints on the Final Advance of the Cordilleran Ice Sheet in Northwest Washington

Mass extinctions in geologic time: Implications for the past, present and future During the past 400 million years of life, evidence of five mass extinction events have been detected in the fossil record. These events caused world-wide destruction and led to collapse of whole ecosystems, producing profound changes in Earth’s history and forever altered the evolution of life. Mass extinctions constitute one of the grand “unifying themes” of our planet. Study of the strata, rocks and ancient fossils related to these episodes of massive dying are revealing much insight into not only the history of our planet, but also evolution… Read more2021-10-09 George Stanley, Univ. Montana (Emeritus) — Mass Extinctions: Five and counting

On Saturday May 22, 2021 @ 4 pm, Dr. Jennifer Pierce of the Dept. of Geology at Boise State University presented a Zoom lecture on “Wildfires, Climate and Erosion in the past, present and future”.  Jennifer has been working on these topics since graduate school and will integrate these three subjects with reference to forests of the Northern Rocky Mountains. Although her studies have been concentrated in the Northern Rockies, the lessons learned apply well to the relatively arid regions of the West. Since she is speaking in late May, we could be into our fire season here in Washington,… Read more2021-05-22 Jennifer Pierce—Wildfires, Climate and Erosion

Geology and the Art of Stone Carving Many members of the Northwest Stone Sculptors Association (NWSSA), including me, use Washington rocks in their art. In this talk, I’ll give an overview of this state’s geological setting  that provide these stones and describe the connections among basalt, dunite, jade, and the glacial erratics that we work with. I’ll highlight a few of my favorite sculptors, talk about some of the stone they work, and touch on tools and techniques we use to sculpt these locally sourced stones. In 2009 King County geologist Greg Wessel curated a geology and art show on… Read more2021-04-10 Trevor Contreras, Geology and the Art of Stone Carving

Our featured speaker on Saturday Feb, 27th is Ben Goldfarb. In Eager: The Surprising, Secret Life of Beavers and Why They Matter, environmental journalist Ben Goldfarb reveals that our modern conception of a healthy ecosystem is wrong, distorted by the fur trade that once trapped out millions of beavers from North America’s waterways. The consequences of losing beavers were profound: ponds drained, wetlands dried up, and species from salmon to swans lost vital habitat. Today, a growing coalition of “Beaver Believers”—including scientists, ranchers, and passionate citizens—recognizes that ecosystems with beavers are far healthier than those without them. From the Nevada deserts to the Scottish highlands,… Read more2021-02-27 Ben Goldfarb, Dam It—How beavers shape the landscape

2021-01-09 Scott Burns: Tasting Terroir—Geologic and climate  influences on wine flavors in the Pacific NW (a talk and virtual tasting)

The Lecture To begin with, Scott will discuss the factors that affect wine flavors, concentrating on the climate and geology of the region.  Oregon and Washington are the number 3 and 2 states in number of wineries in the United States and just across the border, B.C. is the number 2 province in Canada for wine production.  Scott will concentrate on SE Washington and Willamette Valley in Oregon, but will also discuss NW Washington, SW Oregon, and British Columbia (including Vancouver Island which has a solid wine industry too and they are so close to the Olympic Peninsula.  This part will… Read more2021-01-09 Scott Burns: Tasting Terroir—Geologic and climate  influences on wine flavors in the Pacific NW (a talk and virtual tasting)

The Subject What is carbon sequestration?  What are the benefits and risks of geological carbon sequestration in Washington State? And what is technologically possible and economically feasible? We will examine these questions and explore the current state of the science. The Washington Geological Survey is part of a three-year partnership of 13 western states, stimulated by the U.S. Dept. of Energy (DOE). The member institutions, consisting of state geological surveys, universities, and national laboratories (under Dr. Robert Balch of New Mexico Tech), will identify commercially viable interstate networks between carbon emitters and potential subsurface carbon reservoirs. With this initiative as a backdrop, we will learn… Read more2020-12-12 Will Gallin — Geologic Carbon Sequestration in Washington State

How much we know about the Pacific Northwest’s post-Ice Age geologic events has grown rapidly in recent decades. The discovery and study of buried and submerged forests-Victims of past catastrophes, has opened the door to new understanding. Testing techniques such as Carbon 14 wiggle matching and dendrochronology (tree-ring dating) now allow more precise dating of the geological past as well. These capabilities are revolutionizing our understanding of the history, behavior, and effects of past volcanic eruptions, regional earthquakes, major landslides, and (to a limited extent) regional climate history and fluctuations. We will take a snapshot tour of some of the many locations of buried and submerged forests around… Read more2020-11-14 Pat Pringle — Buried and Submerged Forests of the Pacific Northwest

Gold—A Journey from the Big Bang to the Amazon Gold is one of the most fascinating of the 5,400 mineral species on Earth and no mineral (or metal) evokes more emotion, but gold also has an incredible scientific story: a gold nugget is made of material that was not born in our planet or even our solar system. In this talk, world-renowned geophysicist Dr Terry Wallace discusses how the metal was created, how it came to be found on Earth, and the spell it has cast over humankind.  The lecture was broadcast via Zoom on Oct. 3, 2020; the recording… Read more2020-10-03 Terry Wallace — Gold: A Journey from the Big Bang to the Amazon (Zoom)

Click here:  https://youtu.be/jaFWQiZNv38 The Lecture (Starts at around 23 minute mark) This presentation on May 20, 2020 was made as part of Nature in Your Neighborhood, a six-part series of Zoom Lectures sponsored by the Jefferson Land Trust (add link here).  It describes the general geologic history of the Quimper Peninsula during the latest Pleistocene (past 20,000 years) and Holocene (past 11, 500 years).  It focuses on three themes: Glacial meltwater channels — Chimacum Valley The Bluffs Downtown Glacial Erratics with a special challenge The presentation is about an hour long and features geologic interpretation of glacial deposits in the… Read more2020-05-20 Michael Machette — Geology in Our Neighborhood (JLT Recording)