2021-01-09 Scott Burns: Tasting Terroir—Geologic and climate  influences on wine flavors in the Pacific NW (a talk and virtual tasting)

The Lecture To begin with, Scott will discuss the factors that affect wine flavors, concentrating on the climate and geology of the region.  Oregon and Washington are the number 3 and 2 states in number of wineries in the United States and just across the border, B.C. is the number 2 province in Canada for wine production.  Scott will concentrate on SE Washington and Willamette Valley in Oregon, but will also discuss NW Washington, SW Oregon, and British Columbia (including Vancouver Island which has a solid wine industry too and they are so close to the Olympic Peninsula.  This part will… Read more2021-01-09 Scott Burns: Tasting Terroir—Geologic and climate  influences on wine flavors in the Pacific NW (a talk and virtual tasting)

Our featured speaker on Saturday Feb, 27th is Ben Goldfarb. In Eager: The Surprising, Secret Life of Beavers and Why They Matter, environmental journalist Ben Goldfarb reveals that our modern conception of a healthy ecosystem is wrong, distorted by the fur trade that once trapped out millions of beavers from North America’s waterways. The consequences of losing beavers were profound: ponds drained, wetlands dried up, and species from salmon to swans lost vital habitat. Today, a growing coalition of “Beaver Believers”—including scientists, ranchers, and passionate citizens—recognizes that ecosystems with beavers are far healthier than those without them. From the Nevada deserts to the Scottish highlands,… Read more2021-02-27 Ben Goldfarb, Dam It—How beavers shape the landscape

Geology and the Art of Stone Carving Many members of the Northwest Stone Sculptors Association (NWSSA), including me, use Washington rocks in their art. In this talk, I’ll give an overview of this state’s geological setting  that provide these stones and describe the connections among basalt, dunite, jade, and the glacial erratics that we work with. I’ll highlight a few of my favorite sculptors, talk about some of the stone they work, and touch on tools and techniques we use to sculpt these locally sourced stones. In 2009 King County geologist Greg Wessel curated a geology and art show on… Read more2021-04-10 Trevor Contreras, Geology and the Art of Stone Carving

On Saturday May 22, 2021 @ 4 pm, Dr. Jennifer Pierce of the Dept. of Geology at Boise State University presented a Zoom lecture on “Wildfires, Climate and Erosion in the past, present and future”.  Jennifer has been working on these topics since graduate school and will integrate these three subjects with reference to forests of the Northern Rocky Mountains. Although her studies have been concentrated in the Northern Rockies, the lessons learned apply well to the relatively arid regions of the West. Since she is speaking in late May, we could be into our fire season here in Washington,… Read more2021-05-22 Jennifer Pierce—Wildfires, Climate and Erosion 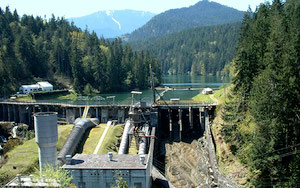 Quimper Geological Society Field Trip October 2, 2021, Port Angeles Area One-day field trip (car caravan) to see the Elwha River’s response to removal of its two dams 7 years ago (2014).  We’ll see the lower dam site, one of the dissected lake basins, sedimentation along the river’s mid-reach and the build out of the river’s delta. Ian Miller, our geologic guide, is with the SeaGrant program of the University of Washington, but resides in Port Angeles close to the action.  In addition, we recruited Keith Denton to talk about the main reason for the dams removal (fish)   Keith is… Read more2021-10-02 Ian Miller & Keith Denton — Field Trip: A decade of changes in the Elwha River as a result of dam removal

Mass extinctions in geologic time: Implications for the past, present and future During the past 400 million years of life, evidence of five mass extinction events have been detected in the fossil record. These events caused world-wide destruction and led to collapse of whole ecosystems, producing profound changes in Earth’s history and forever altered the evolution of life. Mass extinctions constitute one of the grand “unifying themes” of our planet. Study of the strata, rocks and ancient fossils related to these episodes of massive dying are revealing much insight into not only the history of our planet, but also evolution… Read more2021-10-09 George Stanley, Univ. Montana (Emeritus) — Mass Extinctions: Five and counting

2021-11-20 Doug Clark, WWU— Under Ice and Under Water: New Constraints on the Final Advance of the Cordilleran Ice Sheet in Northwest Washington

On Sat. Nov. 20, 2021, Doug Clark, Professor of Geology at WWU, Bellingham presented Lidar data and new stratigraphic, lake sediment, and radiocarbon constraints shed new light a long-standing dispute about the timing and nature of the last major events of the Cordilleran ice sheet in the Fraser Lowland. These new data paint a remarkable picture of glacier advances and retreats interleaved with rises and falls of local sea level during the closing phases of the Pleistocene ice age.  Following its initial retreat from the Puget Sound, the ice sheet briefly readvanced into the Salish Sea near Bellingham, Washington… Read more2021-11-20 Doug Clark, WWU— Under Ice and Under Water: New Constraints on the Final Advance of the Cordilleran Ice Sheet in Northwest Washington