Geology News Notes:  This came across our web desk might be of interest to you

The Washington State Geologist Licensing Board is proposing to amend chapter 308-15 WAC Geologist Licensing Services. As such, the Board sent the attached message to licensees back in July to give them the opportunity to comment on the proposed changes.

The Board would like to request that you post the attached information on your website or send as an email to your membership so they can also have the opportunity to comment on the proposed changes. This will also allow any licensee that did not see the notice, a second chance to comment. All comments are due to the board by September 30, 2019.

We are living in a time of unprecedented and rapid technological, economic, social, and environmental change.  I will argue that, in spite of what seems to be ever greater technological complexity, the largest scale natural “operations” of Earth are actually undergoing an unnoticed simplification, one that is already affecting geological landscapes, biodiversity, global economy, and human population.  I will make predictions about specific “simplifications” that will accrue from sea-level rise, climate instability, diminishing petroleum output, increasing population, and dwindling global food supply.  Whether these simplifications happen fast enough to allay an actual mass extinction (of our species) rather than “just” the current and expanding “mass depletion” over the next century, remains to be observed.

Dr. Peter Ward is a paleontologist and astrobiologist at the University of Washington and a world-renowned authority on mass extinctions, climate change, evolution, and astrobiology.  His research examines the history of life on Earth over billions of years, focusing in particular on mass extinction events.  That work gives him unique ‘deep time’ perspectives on the future of life on this planet, as well as the possibility of life elsewhere in the universe.  Dr. Ward has appeared on NOVA and Ted Talks and written over a dozen popular science books including “Rivers in Time: the Search for Clues to Earth’s Mass Extinctions” and “The Flooded Earth: Our Future In a World Without Ice Caps”. 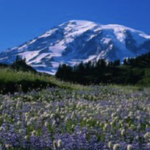 Professor Emeritus Pat Pringle of Centralia College and colleagues led a 3-day trip to the Mount Rainer area to see the geology of this fantastic mountain and its geologic and environmental effects on the surrounding region.  Participants provided their own transportation and lodging (in Ashford and Packwood); we provided field trip log, a published guidebooks, experts on specific aspects of the geology and geomorphology, and a chance to see one of Washington’s three active volcanoes.

The trip started at 11 am Friday at Mud Mountain Dam Park south of Enumclaw.  We made a CCW circumnavigation of Mt. Rainer and ended up on the northeast side on Sunday afternoon, east of Enumclaw. Rain and socked in that day, but good wx for the first two days. Many of the stops were roadside, but we took several 1-2 mile hikes with 300-500  feet of elevation change.  A good time was had by all, and a true value at $50 each.

For more info, you can download the preliminary field trip route and schedule by clicking here. In addition, Pat published a guide to this area that will serve as a more comprehensive resource. Pdfs of the various chapters of the Roadside Geology of Mount Rainier National Park and vicinity, Information Circular 107 (IC-107) as well as pdfs of other publications can be downloaded via links in the Washington Geological Survey’s online catalog.

Go to this link, and then go down to the WGS publications catalog link. This catalog gets updated regularly. Suggestion, it may be easier to download the book as individual chapers, because the entire book is >300 MB.