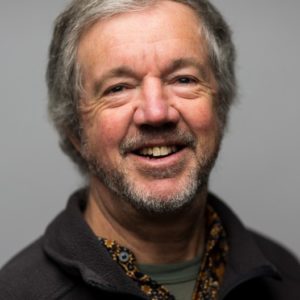 When Americans think of earthquakes, they are likely to think of California. Laced with active faults and subject to frequent quakes, the state certainly stands out on national maps of seismic hazards. But the current maps also highlight seismic hazards farther north, chiefly in Washington and Oregon, which became known since the 1970s through a remarkable series of discoveries in the United States and Japan. USGS geologist Brian Atwater played key roles in these discoveries by identifying, in coastal geology, the traces of earthquakes and tsunamis going back thousands of years.

The 1980 eruption of Mount St. Helens called attention to the Pacific Northwest as a region of ongoing subduction, where one of Earth’s tectonic plates descends beneath another. The mountains provide this subduction zone with its geological name, Cascadia. Subduction zones elsewhere account for Earth’s greatest earthquakes, as large as magnitude 9. But even as recently as 1980, nobody knew whether such earthquakes should be expected at Cascadia.

Atwater, born in Connecticut in 1951, grew up in the relatively geologically sedate area of New England. After earning his bachelor’s and master’s degrees in geology at Stanford University, Atwater completed his doctorate at the University of Delaware in 1980, by which time he was already working for the United States Geological Survey. His early work, centered in the West, included studies of sea-level changes at San Francisco Bay and ice-age floods from Montana.

In 1986, his work in Washington’s Neah Bay first led him to suspect a history of previously unrecorded major earthquakes in that region, a history hinted at by Native American tales of great floods and upheavals. Such tales had led geophysicists to debate the possibility of quakes and tsunamis in Cascadia, but convincing evidence remained elusive. Atwater wondered whether the answers might be found by investigating the region’s coastal geology, leading to a hypothesis he further developed with extensive field investigations. He corroborated his findings in Cascadia with other work in known subduction zones in Japan and Chile.

By 1987, he was ready to announce findings that would upend the mostly-accepted geological notion that, seismologically speaking, the Pacific Northwest had been a relatively quiescent region of North America. He published a paper in the journal Science that detailed how a series of major earthquakes and resulting tsunamis had left behind their unmistakable signature in the coastal sedimentary record of the region. The paper did more than startle legions of formerly skeptical geologists—it accelerated the new geological discipline of coastal paleoseismology. Building upon Atwater’s findings and using data from tree ring records from “ghost forests” destroyed by coastal submergence, scientist David Yamaguchi narrowed down the date of the most recent large Cascadian seismic event to circa 1700.

The date coincided with a tsunami that hit Japan in January of that year, which had come to be known over the ensuing centuries as an “orphan tsumani” because the cause had never been discovered. But Atwater had found the orphan tsunami’s progenitor at last. Traveling to Japan to do extensive historical research in collaboration with Japanese scientists, Atwater confirmed that a magnitude 9 earthquake in Cascadia was responsible for the tsunami that impacted Japan that year.

With the evidence that such strong earthquakes had indeed occurred in the Northwest—and undoubtedly would happen again—Atwater has become a major voice urging the adoption of preparatory measures to safeguard the population and property of Cascadia’s major cities and to plan for the inevitable “Big One” in the Pacific Northwest. In both the scientific press and in popular media, he continues to passionately advocate for earthquake and tsunami public awareness and preparedness. His efforts in public outreach and communication led to his recognition by Time magazine in 2005 as one of America’s “100 Most Influential People.”

Unlike more lab-centric sciences such as chemistry and molecular biology, or mathematical physics done on blackboards and computers screens, geology often requires getting out in the field, digging in the dirt, wading through mud, canoeing down remote streams, and traipsing through scratchy brush in insect-infested wilderness. Far from shying away from those realities, Atwater revels in them, one reason for his prominence as a field researcher who braves the elements for scientific gold. As a long-time affiliated professor at the University of Washington, he has trained and mentored a new generation of geologists and seismologists in the art and necessity of doing good science while getting one’s hands (and everything else) dirty.

Atwater is an American Geophysical Union fellow, a Geological Society of America fellow, and a National Academy of Science member. But as many of his colleagues have noted, even beyond his purely scientific contributions, perhaps Brian Atwater’s greatest award will be a legacy of saving lives by promoting greater awareness and vigilance against the threat of earthquakes and tsunamis in the United States and around the world.  (Above information from the Franklin Institute as of March 2016)

Brian has presented to the Quimper Geological Society in 2011 and again at an Earthquake Hazards Workshop in 2015. More than any local scientist, Brian has brought the hazards of a great Cascadia Earthquake to the public’s attention.  He retired from the USGS recently after nearly 40 years of public service. He continues to be an Affiliate Professor at the Dept. of Earth and Space Sciences at the Univ. of WA, (Updated Oct. 2021) 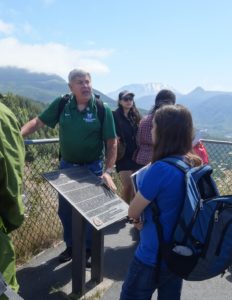 Scott Burns is a Professor Emeritus of Geology and Past-Chair of the Dept. of Geology at Portland State University where he just completed his 28th year of teaching. He was also Associate Dean of the College of Liberal Arts and Sciences at P.S.U. from 1997-1999. Scott has been teaching for 48 years, with past positions in Switzerland, New Zealand, Washington, Colorado and Louisiana. Dr. Burns specializes in environmental and engineering geology, geomorphology, soils, and Quaternary geology. Scott has won many awards for outstanding teaching, the most significant being the Faculty Senate Chair Award at Louisiana Tech University in 1987, the Distinguished Faculty Award from the Portland State Alumni Association in 2001, and the George Hoffmann Award from PSU in 2007. Based on his national leadership performance Scott was chosen to be a fellow of the Geological Society of America (2004) and a fellow with the Kellogg National Fellowship Program (1990 – 1993). He was president of the Downtown Rotary Club of Portland, Oregon’s oldest and largest Rotary club in 2009. Scott is a 6th generation Oregonian who grew up in Beaverton and is very happy to be “home” after a 25 year hiatus! He actively helps local TV, radio stations and newspapers bring important geological news to the public. Scott enjoys all sports, especially basketball, running, skiing, hiking, swimming, tennis, and golf. (From Smithsonian Journeys)

Scott has been a frequent and generous speaker for the Quimper Geological Society.  He conducted Terroir lectures three times (2010, 2015 and 2021), which have been tremendous fundraisers for us.  (Updated Oct. 2021) 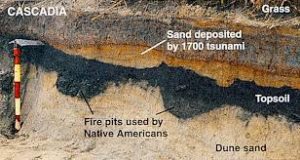 The Jefferson Land Trust Geology Group presents a special workshop on “Surviving the Really Big One” on November 14, 2015. This earthquake and tsunami workshop was created in response to the July 20th article in the New Yorker Magazine, which has received lots of attention both locally and throughout the Pacific Northwest. However, those with a background in geology may have felt that many of the claims in this article were exaggerated or not well founded.

Michael Machette, the organizer of this event, said “as a geologist and leader of the Land Trust’s Geology Group, I have a big appreciation for how a region’s geology shapes landscape and life over long stretches of time. And as a Land Trust board member, I’m thinking about perpetuity–about life and land in Jefferson County for 50, 100, 200+ years into the future. We know massive earthquakes like this are a feature of our region, so I wanted to bring a panel together to focus our thinking on the longer-term hazards and help our community sustain itself into future.”

Toward these ends, Machette has assembled a team of local and regional experts for this workshop.  Presenters will take you from the Magnitude 9 earthquake and tsunami’s source to the local effects with a focus on the Port Townsend area.

Renowned earthquake geologist Brian Atwater (USGS) will discuss the anticipated earthquake and its source. Hazard geologists Tim Walsh (DNR) and Carrie Garrison-Laney (UW) will cover tsunamis (both real and modeled).  Getting into the effects of a large quake, structural engineer Cale Ash (Degenkolb-Seattle) will discuss building response and structural solutions to tsunamis and ground shaking, and Emergency Planner Bob Hamblin of Jefferson County will talk about what it will be like to live through the Really Big One and what you should have done to prepare for it.  The workshop will be from 2:30-5 pm on Saturday, Nov. 14 at the Quimper Unitarian Universalist Foundation (QUUF) at 2333 San Juan Road in Port Townsend. This event is both a community service and a fundraiser for the Land Trust, so a portion of your $40 ticket price is tax deductible.