In his 2012 book, “The Sciences and the Arts,” Chemist Harold Cassidy draws parallels between the way artists and scientists view their worlds. He states that “there is no subject that is unfit for the probing insight of the artist, nor is there anything unsuitable for the scientist to examine.”

The premise of Dr. Pestrong’s presentation is that Art is central to the Earth, both figuratively and literally. If you cover the first and last letters of the word “Earth”, there is “art”. This is a symbolic indication of how integral Art is to the Earth and how aspects of the Arts enhance our understanding of Earth Sciences.

A 21st-century paradigm is emerging in which the integration of different fields of knowledge is seen as a necessary goal. When connections are established among otherwise disparate bits of data, more universal theorems and deeper understanding result. Our speaker’s goals, in this context, are to show how aspects of the Arts may be used to generate interest and gain insights into how the Earth works and to demonstrate how logic is not restricted solely to the scientist and that intuition is not the sole realm of the artist. This hour-long program has been shown all across the United State to a broad spectrum of audiences. It was developed as a teaching tool for introductory geology courses, but its wide acceptance is an indication of the profound interest we have in the physical environment. Like the world it reflects, Earth Art is constantly changing as new relationships become apparent; as you’ll see, Earth Art comes in many forms.

Ray Pestrong is an Emeritus Professor of Geology in the Department of Earth & Climate Sciences at San Francisco State University. For 44 years, he has taught geomorphology and engineering geology, as well as numerous general education courses in introductory geology. Dr. Pestrong has written college texts and scientific articles and has produced geologic videos. For the past 22 years, Ray has led rafting trips on the Colorado River through the Grand Canyon. What he loves most is teaching and the exciting interactions possible through that venture. 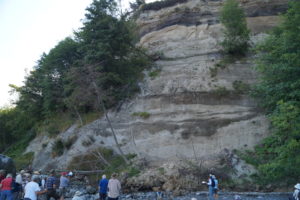 Hank Schasse of Olympia, WA, will discuss the geology of the Port Townsend region.  The one-hour lecture will be at the Jefferson County Public Library in Port Hadlock starting at 3:30 pm on Friday, June 26th.  Seating is limited to about 80 persons.  There is no cost for the lecture, but a $5 donation would be appreciated to offset costs associated with travel and other support for the speaker and event.

Port Townsend sits at the northern end of the Quimper Peninsula, a promontory that juts northeast into the Salish Sea. The peninsula is underlain by Tertiary rocks (~50 to ~25 million years old, here) that are composed of locally erupted oceanic basalts and associated conglomerates, and marine sandstones, other conglomerates, and intervening shales. These rocks have been uplifted, tilted, and faulted through progressive onshore deformation associated with Cascadia subduction and northern transport of crustal rocks. With the onset of continental glaciation about 2 million years ago, tongues of ice as much as 4,000 ft thick flowed southward from British Columbia and plowed across the topography as far south as Olympia and west to the coast.  As many as a dozen separate glaciations occurred, but only the latest advance (the Vashon, ~20,000 to 12,000 years ago) has left a clear record of its movement and deposits.

Hank will illustrate many of these relations during his talk, based on his 2004-05 mapping of the Port Townsend and Port Hadlock areas.  Come prepared to ask general questions about your favorite areas and outcrops. Field trip included walk and discussions of glacial stratigraphy along the beach at Fort Worden. Hank Schasse as a geologist for the Washington State Department of Natural Resources, Geology Division spent much of his career mapping the geology of Washington.  Hank is now retired but still loves to share his knowledge of the area of Port Townsend.

Too High and Too Steep—Reshaping Seattle’s Topography Today’s Seattle looks very different from the landscape that its founding settlers first encountered. As the city grew, its leaders and inhabitants dramatically altered its topography to accommodate their changing visions. In Too Steep and Too High, writer and geologist David Williams illuminates the physical challenges and sometimes startling hubris of these large-scale transformations, helping us find visible traces of the city’s former landscape and understand how Seattle has been radically reshaped.

His list of books includes several naturalist’s guides to Canyon Country, The Street-Smart Naturalist: Field Notes from Seattle, Cairns—Messengers in Stone, Stories in Stone (which he told us about in 2013), and his newest book—Too High and Too Steep—Reshaping Seattle’s Topography. David says his interest in urban geology was sparked by the use of stone in the Downtown Seattle Transit Tunnel.  Book signing as well…

David B. Williams is a freelance writer focused on the intersection of people and the natural world. His books include Stories in Stone: Travels Through Urban Geology; The Seattle Street-Smart Naturalist: Field Notes from the City; Cairns: Messengers in Stone. Stories in Stone; and Too High & Too Steep the subject of today’s talk. David also works at the Burke Museum and is a former National Parks ranger in Utah and Massachusetts. He maintains the blog GeologyWriter.com from his home base in Seattle.