The Battle for the Abyss:  Mining, conservation, and bioprospecting interests square off on the deep sea

Nearly 60% of the surface of our planet is covered by more than 2000 m of water. The deep seabed is the largest and least explored ecological region on Earth. With no light for photosynthesis, this cold high-pressure environment is a food desert, with most organisms feeding on organic debris that sinks from the surface ocean. Yet, there are an estimated 500,000 or more species in the deep sea, many of which occur nowhere else. The abyss has seen relatively little disturbance from human activities, but that situation is poised to change. Economic growth is driving increasing demand for base metals and rare-earth elements. Known mineral resources on land will soon be insufficient.  Seabed mining is now technologically feasible and regulatory agencies such as the International Seabed Authority are currently finalizing regulations for mineral extraction.  Environmental disturbance from seabed mining operations will be significant, with some mining operations at the scale of 10,000 square kms or more. My presentation will shine some light on the current debate between deep-sea mining interests and the interests of biodiversity conservation and genetic resource biodiscovery. And I will also touch on some of the technologies that are being used for deep-sea exploration.

Manganese nodules, cobalt-rich manganese crusts, and polymetallic sulphides comprise the major mineral deposits that are currently being considered for mining. The romantic view of deep-sea mining that emerged in the mid-20th century must now contend with the realization that each of these deposits host unique faunal and microbial communities that would be severely impacted by mining operations.  Together, we will explore each of these environments and their inhabitants through imagery collected by research submersibles, and learn more about their biodiversity, their contribution to ocean ecosystem function, and their potential for biotechnological and pharmaceutical applications.  We will also introduce some of the players in this “battle for the abyss,” from regulatory agencies to mining companies, deep-sea biologists and Big Pharma.

On Saturday February 19, geologist and photographer Marli Miller spoke about the geology of Oregon and Washington as seen along our federal and state highways as outlined in her recent Roadside Geology books.  With its spectacular mountain ranges, lush valleys and awesome rivers, the Pacific Northwest landscape offers an incredible geologic story grounded in continental accretion and mountain-building, magmatism, and glaciation.

Beginning with the Crescent Terrane (Siletzia), the latest addition to North America, she described elements of continental accretion that form the underlying but diverse basement of the region, followed by a photographic “roadtrip” up the Columbia Gorge that illustrated younger features. Along the way, the many geologic complexities raise important questions, opportunities for new research, and fascinating stories.  The Zoom broadcast was free and open to the public, as are all our recorded events. Marli’s book on Washington Roadside Geology is available from Amazon as well as local booksellers. 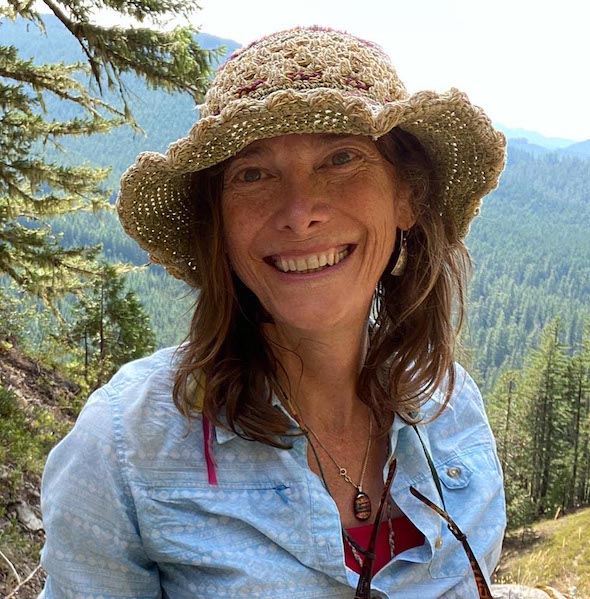 Marli is a tenured Senior Instructor II and Researcher in the Dept. of Earth Sciences at the University of Oregon and maintains the website geologypics.com, which offers free downloads of more than 4,500 of her searchable geology photographs. This site is a godsend for instructors and authors

Ultimately, Marli thinks this whole science of geology boils down to teaching—if we can’t communicate what we’ve learned, what good is it?  Fortunately, the geology department here really values teaching, so there are plenty of people with whom she can share ideas.

Nevado del Ruiz (Colombia) and Mount Rainier (US) exist a hemisphere apart, but they both project similar hazards for communities downstream.  Central to their stories is the development and continued presence of weak and collapse-prone hydrothermally altered rock, and perennial covers of glacier ice and snow. Slopes of both volcanos are mantled by loose rock debris that can be remobilized to initiate lahars. At both volcanoes, five major glaciofluvial rivers flow down narrow valleys to lowland areas that support large human populations. More than a 150,000 persons live in areas at risk of lahars that could emanate from Rainier.  Thirty-six years ago, Colombia’s Nevado del Ruiz initiated a lahar that killed an estimated 25,000 people. Today, we’ll examine hazards at both volcanoes; discuss international synergies for risk reduction, progress and challenges, and review some practical lessons learned about community risk reduction. 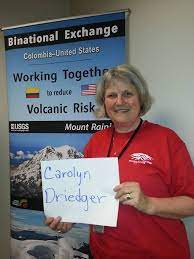 Carolyn Driedger is a Hydrologist and Outreach Coordinator at the U.S. Geological Survey in Vancouver Washington.   Her science career began with research on glaciers and glacier-related hazards principally at Cascade Range volcanoes, and at Columbia Glacier Alaska. Carolyn witnessed the May 18, 1980 catastrophic eruption of Mount St. Helens and participated in the initial news media response.  This event set the course for several fascinating projects that crossed science disciplines, and it provided a front-row seat for observation and reflection upon the role of scientists in society. Carolyn learned that scientists must use the same degree of creativity and care with public communication that they use with scientific endeavors.  Now, as CVO’s Outreach Coordinator, she works in partnership with public officials, emergency planners, media, park interpreters, and educators to advance the cause of eruption preparedness.  Some earlier career choices have informed current work, including several years of teaching in a US public school and private school in Kathmandu Nepal, and working for the National Park Service.