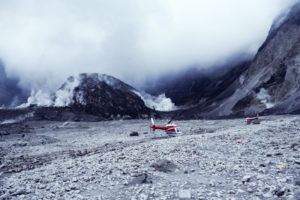 Christina Heliker began working at Mount St. Helens shortly after the cataclysmic eruption on May 18, 1980.  For the next several summers, she was in the field almost every day, working as part of the crew monitoring the ground deformation of the volcano.  Following the big blast on May 18th, there were five smaller eruptions in 1980 that produced pyroclastic flows. Using traditional (pre-GPS) surveying techniques, the “deformation crew” measured the inflationof the volcano’s flanks prior to each outbreak, as a means of predicting new activity.

By 1981, her fieldwork was mainly inside the crater, measuring the changes to the lava dome that preceded the numerous dome-building eruptions over the next several years.  At the same time, she was collecting samples of dome lava that contained inclusions of “foreign” rocks that were incorporated into the magma as it rose through the crust. These became the focus of her graduate work.  Ash bursts from the dome, swarms of micro-earthquakes, and constant rockfalls from the crater rim made it an exhilarating time.

Since returning to the Northwest, Christina has revisited the crater, hiking in as far as the terminus of the fast-growing glacier that has wrapped around dome. Her talk will include an update on current conditions at Mount St. Helens, nearly 40 years after the big eruption.

Christina Heliker is a geologist who spent most of her career working for the U.S. Geological Survey on active volcanoes.  Her first job with the USGS, however, was working on glaciers from an office in Tacoma.  When Mt. St. Helens erupted in May 1980, she quickly transferred to Vancouver, to what was soon to become the Cascades Volcano Observatory.  She worked there for the next four years while completing a Master’s degree at Western Washington University in Bellingham. In 1984, she moved to the USGS’s Hawaiian Volcano Observatory on the Island of Hawai`i, where she monitored the 35-year-long eruption of Kilauea until retiring. Christina returned to the Northwest in 2012, settling in Sequim, where she spends her time hiking and snowshoeing in the Olympic Mountains and working on her photography. 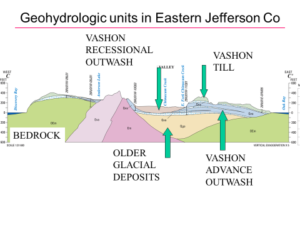 In the Puget Sound region environmental tracers utilized in groundwater studies include: (1) isotopes of hydrogen and oxygen that help to identify recharge areas, (2) tritium (a product of atmospheric bomb testing) and various manmade compounds (sulfur hexafluoride and chlorofluorocarbons, or CFCs) that are used to date modern groundwater that entered the aquifer within the last century, and (3) carbon-14, which is used primarily to date groundwaters older than 100 years. The age of groundwater, which is the time elapsed since precipitation entered the groundwater system and became isolated from the atmosphere, is measured with isotopic tracers such as tritium and carbon-14.

Estimates of groundwater age in Pierce County and Kitsap County range from less than 50 to roughly 5,000 years, and in general, groundwater in shallow aquifers is younger that groundwater in deeper aquifers.  Click here to find the age-dating Bangor report… Steve Cox earned his B.S. in Environmental Science from the University of Puget Sound in 1978, and was hired by the USGS following the eruption of Mt. St. Helens in 1980.  Since 1983 he has been with groundwater water-quality section of the USGS Washington Water Science Center, located in Tacoma.  Much of his work has been focused on the age, movement, and quality of groundwater in aquifers throughout western Washington, but he has also worked on smelter-derived contamination of water and sediment at Lake Roosevelt, behind Grand Coulee Dam.