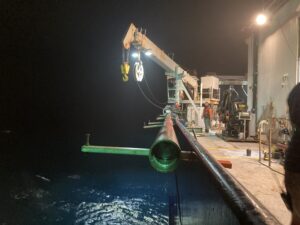 Dr. Chris Goldfinger, will explore the relation of offshore turbidites to the paleoseismic record of the Cascadia subduction zone.

Submarine paleoseismology is a multidisciplinary science that allows us to reconstruct earthquake histories extending back thousands of years. We now use a variety of techniques, many originally developed for petroleum exploration, to study earthquake-generated submarine deposits (turbidites). By correlating these deposits over broad areas and examining their sedimentological characteristics, we can gain insight into recurrence intervals, fault rupture lengths, event clustering, long-term strain histories, paleo-slip characteristics, and interactions between faults. Comparing turbidite deposits associated with recent major earthquakes (e.g., 2004 Sumatra, 2016 New Zealand) with seismological records of those events is an important part of understanding ancient earthquakes.

In Cascadia, a 10,000-year onshore-offshore record, developed in large part using submarine paleoseismology, has identified periods of earthquake clustering and quiescence. The pattern – clusters of 4-5 events separated by gaps of 700-1200 years – is unlikely to be randomly generated. Cascadia is broken into at least four segments that have differing recurrence intervals, decreasing from ~ 430-500 years in the north to ~ 240 years or less in the south. However, several lines of evidence suggest that inter-event time is not a good predicter of earthquake magnitude. Long turbidite records for Cascadia and the northern San Andreas Fault also reveal that the two faults have very similar event histories about 75% of the time, suggesting these major faults can trigger one other. 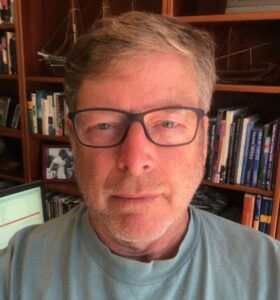 Dr. Chris Goldfinger, emeritus professor at Oregon State University (OSU), is a marine geologist and geophysicist with a focus on great earthquakes and structure of plate boundary fault zones around the world. Chris has been involved in over 45 oceanographic cruises over the last 30 years, using many geophysical tools (deep submersibles, sidescan sonar, seismic reflection, etc.). He is currently working on great subduction earthquakes along the Cascadia, NE Japan, the Caribbean, and Sumatran margins, as well as the northern San Andreas Fault, where he uses the evidence for earthquakes found in deep-sea sediments.

Chris received his PhD from OSU in 1994. He is a Fellow of GSA and was the recipient of the 2016 GSA Kirk Bryan Award for Quaternary Geology. Windsurfing in the Columbia River Gorge and aerobatic flying are some of his favorite sports, as well as sailing.

This lecture will be only be broadcast by ZOOM, there will not be an in-person meeting.