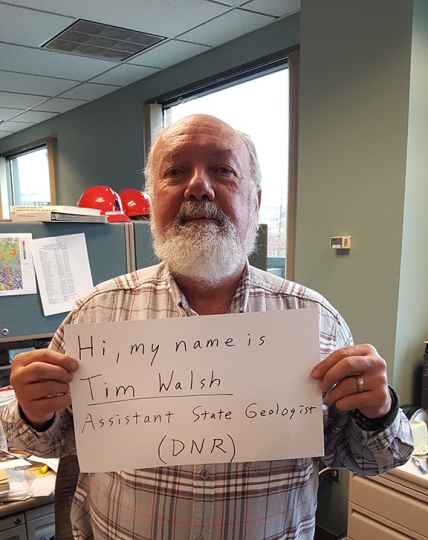 An era is ending at the Washington State Department of Natural Resources. After a very productive 38-year career Tim Walsh is retiring in 2018 from the Washington Geological Survey. It seems like a long time to us, but to geologists, 38 years is a standard rounding error.

Tim Walsh began his career at DNR in 1980 as a project geologist for the Survey mapping and assessing coal resources in Washington. Shortly after his hire, Tim flew a reconnaissance flight to observe smoke coming from Mount St. Helens. The small plane carrying the California native could barely top the mountain’s then 9,677-foot elevation. Had he waited a couple months, he could have easily circled the peak, as the May 18, 1980 eruption took 1,314 feet off Mount St. Helens’ top.

He also provided technical assistance for large geological events in Washington, including the eruptions of Mount St. Helens in 1980 and 2004, the 2001 Nisqually earthquake, the storm-related landslide events of 2007 and 2009, the 2014 SR530 landslide at Oso and more recently, the 2017–2018 Rattlesnake Hills landslide.

In 2017, Tim accepted the Assistant Division Manager position for the Survey, advising the geological hazard assessment work in the Chehalis Basin, serving to bolster Resilient Washington’s efforts, and providing guidance on the Washington School Seismic Safety projects. Tim authored or co-authored 71 Washington Geological Survey publications. He is one of the foremost voices in what we know about how Washington was formed.

We are going to miss hearing his many, many stories every day. Stories about bee attacks during field work, infamous arguments between geologists at conferences, and local geology lore for anywhere we go to do more geologic investigation.  We will also miss his old-school blue-and-yellow Powerpoint presentations that read like novels.

We will always appreciate his ability to leave his ego at the door and freely share his vast well of knowledge. He mentored many of us, and made a team of geologists better for it.

He intends to spend his retirement teaching, volunteering, traveling, and gardening.

Tim Walsh participated in an Earth Hazards Workshop that the QGS organized and sponsored in Nov. 2015, with 125 paying participants.  He and Carrie Laney-Garrison lectured on Tsunami Hazards in the Port Townwsend area.  (Updated Oct. 2021; From a DNR press release, August 29, 2018)