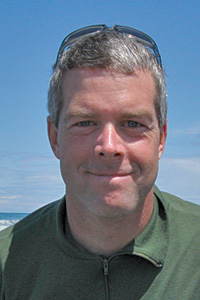 From 2011 to the present, Ian Miller, Washington Sea Grant’s coastal hazards specialist, has played an active role in investigating and assessing the coastal influences of the Elwha watershed restoration. Removal of the two dams eventually led to the transfer of 19 million metric tons of mud, sand and gravel that had been trapped in the reservoirs to the coastal zone. WSG-funded research confirmed that sediment reconfigured the shoreline, restored eroding beaches and led to cascading ecological changes in the estuary and nearshore zone around the river’s mouth.  Based at Peninsula College, Dr. Miller focuses on research, education, and outreach on natural coastal hazards on the Olympic Peninsula, including hazards due to climate change, tsunamis, and chronic erosion. He has a bachelor’s degree in marine ecology from Western Washington University and earned his doctorate in oceanography from the University of California—Santa Cruz in 2011. Ian spoke to the QGS in 2013, and has lead field trips to the Elwha River in 2013 and 2021.  (Updated Oct. 2021)