Mt. Rainier—New Information about the Volcano in Our Backyard Mount Rainier has been called the most hazardous volcano in the United States. It’s an active volcano with a seismic pulse and hissing fumaroles in its east summit crater; some crater water is at the 86° boiling point for that elevation. Recent research shows that this sleeping giant has erupted for more than half a million years and that it has had more than 40 eruptions since glaciers retreated from the Puget Lowland about 15,000 years ago. It has generated great lahars (huge volcanic debris flows) that buried forested river valleys for tens of kilometers. Some lahars flowed all the way to Puget Sound and, along with later sedimentation, greatly modified the Puget Lowland landscape. The volcano’s glaciers have been retreating in recent years, and as they do, rivers heading on Mount Rainier have been moving sediment quickly downstream, resulting in an annual drumbeat of alluviation in lowland areas. Pat will discuss how geologists are continuing to study and monitor the volcano and the potential impacts of future eruptions.

Mr. Pringle is Assoc. Professor of Earth Science at Centralia College, Washington. He was with Washington DNR’s Division of Geology from 1990 to 2005 and with the U.S. Geological Survey’s Cascades Volcano Observatory from 1982 to 1990. Pat studies volcanoes, earthquakes, landslides, and debris flows, commonly using radiocarbon and tree-ring analysis to establish the history of past geologic events. He is the author of books on the roadside geology of Mounts St. Helens and Rainier. His Mount Rainier book won “Best Guidebook Award” at the Geological Society of America’s 2009 Annual Meeting. 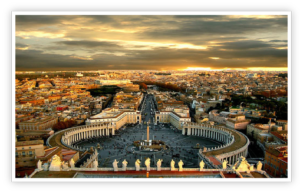 From its time as the historic center of the Roman world, Rome has been continuously a political, religious, and administrative capital. Geologic and terrain factors assured its population growth and provided the conditions for survival of its culture in the ancient world. From lessons of urban development and prosperity, the Roman people developed a capacity to recognize and to manage the natural resources of the region. Modern Rome was developed in a haphazard manner after WW II. Most residents have not been pleased with the results of rapid development, but they have developed a strong sense of needing to care for the city and to better manage its environment. There are new, detailed geologic maps of the city, programs for engineering and environmental geology, and cooperative work with archeologists—all within the city and regional governments. It is appropriate that the term urban geology has its origin in Urbs, which was the ancient name for the City of Rome. This talk is based on his 2005 book The Seven Hills of Rome—A Geological Tour of the Eternal City(G. Heiken, R. Funiciello, R., and D. De Rita, Princeton University Press, Princeton, 288 p). After completing his Ph.D. at the University of California in Santa Barbara in 1972, Grant Heiken worked for NASA’s Apollo Program as a geology instructor and as a researcher on lunar surface processes.

In 1975, he and his wife moved to the Los Alamos Scientific Laboratory in New Mexico, where he worked on geothermal exploration and development, volcanic hazard analysis, the uses of volcanic rocks, basic research on explosive volcanism, continental scientific drilling, and integrated urban science. He has co-written or edited 11 books. He retired in 2003 and moved to Freeland on Whidbey Island, Washington, with his wife Jody, who is a scientific editor. Grant volunteers for several service organizations, is on the board of the Whidbey-Camano Land Trust and is on the Island County water-resources advisory committee.

Geomythology: The Quest for Scientific Explanations of The Great Flood and Other Mythical Catastrophes Myths from many cultures around the world contain descriptions of phenomena or events that bear a striking resemblance to natural disasters including floods, earthquakes, volcanic eruptions, tsunamis, and meteorite impacts. Geomythology is an emerging discipline that combines geology, archaeology, mythology, and history to investigate the possibility that some of these mythical “stories” may in fact be garbled accounts of actual events that occurred in the distant past. There is strong evidence that some myths originated over 7,000 (and possibly up to 40,000) years ago. Thus a major challenge in geomythology is to see through the changes these stories underwent as they were passed down orally over hundreds of generations. In this talk we will examine the origins of the Great Flood story, analyzing the Biblical and Mesopotamian versions as well as possible linkages to catastrophic flooding of the Black Sea. We will also discuss Plato’s account of the sinking of Atlantis and several stories that appear to have originated with earthquakes and tsunamis. Included among the latter are legends from the Pacific Northwest that feature battles between the Thunderbird and the Whale, a motif now recognized as a tsunami metaphor. Jeff Tepper is a Professor and Chair of the Geology Department at the University of Puget Sound. He received his AB from Dartmouth College and his MS and Ph.D. from the University of Washington, where he studied the origins of granites in the North Cascades. After teaching on the east coast for ten years, he joined the faculty at Puget Sound in 2001. Dr. Tepper’s research uses geochemistry to investigate geologic questions. He and his students are currently studying the Eocene magmatic and tectonic history of the Pacific Northwest, the environmental history of the Puget Sound area as recorded in lake sediments, and the behavior of heavy metals in sediment.