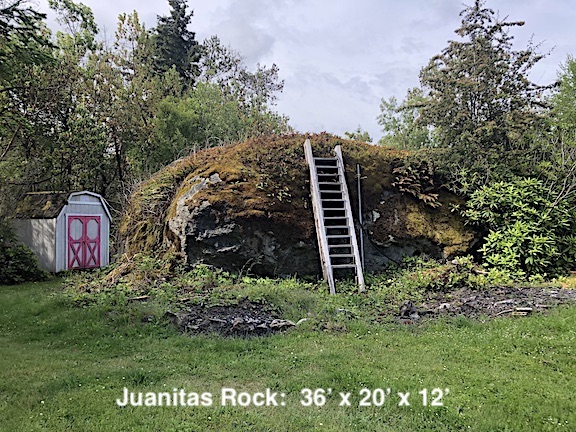 The Erratic Results are In!

The Erratic Challenge has come to a successful end.  As you may know, erratics are exotic rocks or boulders that have been brought from a distance by glacial action. For the Quimper Peninsula, that means boulders brought south about 18,000 years ago by the Vashion glaciers that originated in Canada and Northern Washington.

Contestants were given a month to follow up on our challenge to find the biggest or best glacial erratics in the area, specifically on the northern Quimper Peninsula (land) north of Highways 101 and 104. Their reward was a Jefferson Land Trust hat embroidered with “Erratics Rock.”  Some participants were compelled to journey farther—more power and gas to them. In the long run, 24 Intrepid Explorers, (click here)… submitted over 100 erratics that are 6 ft or longer. Erratics can be easily found all over the Peninsula, including Marrowstone and Indian Islands. They are particularly common on the beach at water’s edge or partially submerged.  To be a contender, we limited the winning erratics to those on land only (sorry, otherwise we’d have to include some pretty big ones offshore).

To cull the list, we tabulated the data for the 16 erratics on land that measured 10 ft or longer. Another 15+ were located partially or occasional submerged or out of the designated area.  For the on-land erratics, ten are 10-15 ft long while five are 15-25 ft long. List of erratics to view/print, click here for PDF.

The winner is a humongous 36 ft (Juanita’s rock). 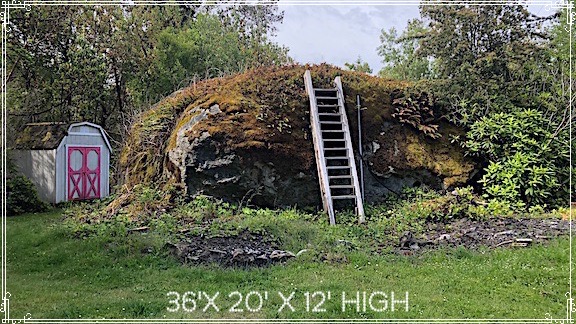 Juanita’s rock was uncovered when the Woodland Hills subdivision was developed 25-30 years ago. This erratic (36 ft x 20 ft x 12 ft high) was found by Seton Construction when they cleared one of the lots overlooking the south end of the Jefferson County airport. Petrologically (the geologic term for rock type) it’s a greenstone, which is metamorphized basalt that came from the northern Cascades or Canada’s coastal mountains.  Juanita’s rock has an estimated volume of 245 cubic meters (320 cubic yards) and it probably weighs in around 700,000,000 kg (which is 700 metric tons or 756 US tons. (Math corrected 6/26/2020 by William Nesse.)  Since Seton couldn’t move this whopper, it was included at no charge when Juanita Urb bought the Woodland Hills lot in 1995. She mentioned that the rock was so large that people came to see and photograph it for several years.  However, it had been long forgotten until Calmar McCune mentioned it in an email.  Calmar gets an Erratic Hat.

Another notable aspect of this effort to “Extend Your Reach” was the excitement it generated.  One contestant, Barbara Stahler of Coyle, spent several days roaming the County from Dabob Bay on the south to Fort Flagler on the north.  She compiled and submitted a List of 60 Erratics, all with dimensions, GPS coordinates, and photographs.  As ringleader of this contest, I unilaterally crown her “Queen of the Erratics” and she gets an Erratic Hat.

The Egg & I Road south of Chimacum is well known from Betty McDonald’s 1945 book about her farm, but in 2008 Phil Vogelzand and Katie McCoy bought the 20-acre parcel and started their own Egg & I Farm.  Later they conceived and built the Corner Farmstand at the heart of Chimacum.  So it’s fitting that one of the larger entries is the Egg & I Rock.  An Erratic Hat goes to Phil Vogelzang.

Another person that we need to acknowledge is Kitty Reed, who initiated this geology group many years ago and has led numerous geo-beach walks along the bluffs of Fort Worden, from the lighthouse to North Beach.  A long-time glacial-erratic fan, Kitty and her deceased husband Gerry have been watching one notable erratic on that stretch of the beach.  It has a Coast and Geodetic benchmark mounted on the top of it.  That’s a first as far as we know. Check it out.

Honorable Mentions (in water or out of area)

When I visited the Egg & I Farm, Doyle Clancey (the Caretaker) mentioned a giant rock he’d seen along Tarboo Creek.  This was our of our search area, but what the heck, I had to check it out.  OMG.  You can see it from a 1/4 mile away at the back of Mark and Tami Pokorny’s farm, which is appropriately called the Valley Rock Farm (“we grow them big”).  Mark and Tami (a geologist) took a keen in this knocker which the USGS had inspected back in the 60’s.  It’s a greenstone (metabasalt like Juanita’s Rock) that measures roughly 40′ x 25′ x 15′, but has more than twice the volume (and weight).  It’s surrounded by blackberries so it remains to be well measured, but Pokorny’s Rock is currently the LARGEST GLACIAL ERRATIC on the Quimper Peninsula.  Congratulations!

An even larger erratic was documented in July by Eric Nagle.  It’s a metabasalt like many others that measures roughly 43′ x 34′ x 20′.  Its located on the ridge about Tamanowas Rock and is currently the LARGEST GLACIAL ERRATIC on the Quimper Peninsula.  Congratulations Eric.