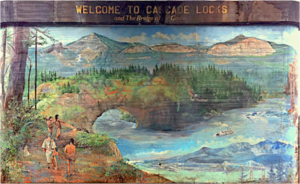 Bridge of the Gods & the Bonneville Landslide

In the heart of the Columbia River Gorge, where the Columbia River breaks through the Cascade Range, an 1800-feet-long steel truss bridge spans the Columbia River at a particularly narrow spot near the town of Cascade Locks. This bridge is known as the Bridge of the Gods. But this modern name derives from a much larger Bridge of the Gods that crossed the Columbia River in about 1450 AD. This earlier “bridge” was not really a bridge, but a blockage, the result of a huge landslide, known as the Bonneville Landslide, which headed on Table Mountain on the Washington side of the river and cascaded downward, filling and damming the Columbia River valley with 5 square miles of debris up to 400 feet thick. Recent investigations using radiocarbon dating and dendrochronology show the landslide occurred around 1450 AD, whereas earlier dating permitted a possible link to the 1700 AD Cascadia earthquake.

The Bonneville Landslide almost certainly gave rise to the Native American legend of the Bridge of the Gods. Oral histories of the region indicate that the Native Americans “could cross the river without getting their feet wet.” After blockage by the Bonneville landslide, the Columbia River formed a great lake behind the debris dam, also noted by Native American accounts of the Columbia River rising to great heights upstream. Sometime after overtopping, the Columbia River cut cataclysmically through and around the southern edge of the landslide mass. But the downcutting was not complete, and large rocky debris too big to be carried away by the river remained, creating the set of foaming rapids, first mapped by Lewis and Clark as “The Great Shoot.” Cascade Rapids were drowned by the 1938 completion of Bonneville Dam. 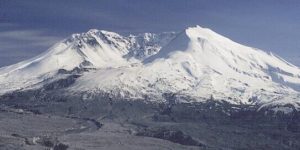 For months in early 1980, scientists, journalists, sightseers, and nearby residents listened anxiously to rumblings in Mount St. Helens, part of the chain of western volcanoes fueled by the 700-mile-long Cascadia fault. Still, no one was prepared when an immense eruption took the top off of the mountain and laid waste to hundreds of square miles of verdant forests in southwestern Washington State. The eruption was one of the largest in human history, deposited ash in eleven U.S. states and five Canadian provinces, and caused more than one billion dollars in damage. It killed fifty-seven people, some as far as thirteen miles away from the volcano’s summit.

Shedding new light on the cataclysm, author Steve Olson interweaves the history and science behind this event with page-turning accounts of what happened to those who lived and those who died.

Powerful economic and historical forces influenced the fates of those around the volcano that sunny Sunday morning, including the construction of the nation’s railroads, the harvest of a continent’s vast forests, and the protection of America’s treasured public lands. The eruption of Mount St. Helens revealed how the past is constantly present in the lives of us all. At the same time, it transformed volcanic science, the study of environmental resilience, and, ultimately, our perceptions of what it will take to survive on an increasingly dangerous planet.

Rich with vivid personal stories of lumber tycoons, loggers, volcanologists, and conservationists, Eruption delivers a spellbinding narrative built from the testimonies of those closest to the disaster, and an epic tale of our fraught relationship with the natural world. Steve will have a book signing and sale before and after the lecture. For more information about the Jefferson Land Trust’s Geology Group, visit our website. Steve is a freelance writer based in Seattle who has had the good fortune to write about some of the most interesting and important topics of our time, including genetics, race, human origins, evolution, climate change, education, talent, competition, and punk rock music. Here’s a short bio. My most recent book (and the subject of my Geology Group lecture) is Eruption: The Untold Story of Mount St. Helens, which was named one of the 20 best nonfiction books of 2016 by Amazon, was nominated for The Boardman Tasker Prize for Mountain Literature and was an Indie Next selection

Meteorites—Exotic Fragments of Other Planets and Asteroids

Meteorites are extraterrestrial rocks or metal-rich objects that fall onto our planet.  Sometimes those that survive entry through our atmosphere are found and analyzed.  However, until 1492 when the Ensisheim meteorite was seen falling to Earth in France, the idea of rocks from space was not accepted.  Since then and especially over the past 20 years, this field of study (meteoritics) has grown significantly due in large part to the recovery of many new specimens, especially from the barren deserts of Northern Africa.  Meteorite samples can be quite valuable as collector items.

Dr. Irving’s presentation will describe how research on meteorites is conducted and how the results have greatly expanded our knowledge of the history of the Moon, Mars, and bodies within the Asteroid Belt between Mars and Jupiter. Tony Irving, UW professor and world expert on meteorites, holds one of his meteorite samples that have been dated at 4.6 billion years. He is an international expert in meteorites, having identified more than 1500 samples from Northwest Africa, Oman, China and the USA and published over 90 articles in international journals and books.  He received his B.Sc. and Ph.D. degrees in Australia.

In addition to Tony’s lecture, local meteorite collector Eric Twelker will be on hand to display some samples of meteorites from his extensive collection. Eric Twelker of Port Townsend has been a lawyer, organic farmer, and geologist. However, his passion has been meteorites.  Eric’s online business, the MeteoriteMarket.com, is twenty-two years old and was the first meteorite catalog available on the internet in 1995.