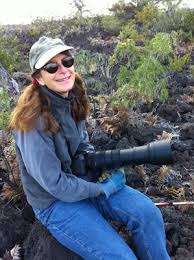 Christina is a geologist who spent most of her career working for the U.S. Geological Survey on active volcanoes.  Her first job with the USGS, however, was working on glaciers from an office in Tacoma.  When Mt. St. Helens erupted in May 1980, she quickly transferred to Vancouver, to what was soon to become the Cascades Volcano Observatory.  She worked there for the next four years while completing a Master’s degree at Western Washington University in Bellingham.  In 1984, she moved to the USGS’s Hawaiian Volcano Observatory on the Island of Hawai`i, where she monitored the 35-year-long eruption of Kilauea until retiring. Christina returned to the Northwest in 2012, settling in Sequim, where she spends her time hiking and snowshoeing in the Olympic Mountains and working on her photography.

Since returning to the Northwest, Christina has revisited Mt. St. Helens’ crater, hiking in as far as the terminus of the fast-growing glacier that has wrapped around dome. Her talk entitled Working in the crater of Mount St. Helens, 1980-83, will  include an update on current conditions at Mount St. Helens, nearly 40 years after the big eruption. (Updated Oct. 2021)