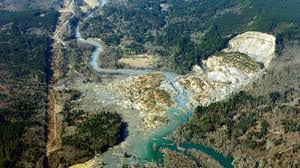 The Hazel/Oso Landslide of March 22, 2014: Geologic Background, Other Landslides, and Landslide Policy Implications for Washington

On March 22, 2014, at 10:37 a.m, a massive landslide struck a rural area of the Stillaguamish River Valley, killing 43 persons and displacing many more. News of this catastrophe spread through the surrounding communities, some of which were cut off from outside help. However surprising this may seem, the geology history of the area shows that is has a long history of hazardous behavior.

About 20,000 years ago, the advance of the Puget ice lobe into the Puget Sound area blocked the outlets of several rivers flowing out of the Cascade Range. Glacial-related sediments deposited within the Stillaguamish River Valley were later incised, initially by the combined flow of the Stillaguamish and Sauk Rivers and then by continued erosion of the North Fork Stillaguamish River. The erosion has left steep, high terraces of unconsolidated sediments along the valley walls, which have led to multiple deep-seated large landslides that have covered the North Fork Stillaguamish River Valley floor on multiple occasions. The catastrophic Hazel/Oso Landside is simply the latest valley-covering landslide in this long post-glacial history. There are some unique geologic aspects of the Oso Landslide that will likely offer some valuable lessons regarding landslide risks and help inform policy regarding landslides. This talk will attempt to put the Hazel/Oso landslide in perspective with other landslide hazards in Washington State. While the Hazel/Oso Landslide may hold some technical and policy lessons, information on other landslide sites in Washington State will be presented, including some landslides in Jefferson County. Part of the presentation will discuss how landslide risks and public policy meet and various approaches to landslide hazard risk reduction. Dan McShane has a B.Sc. and M.Sc. in Geology from WWU in Bellingham. He has worked as a geologist and engineering geologist in Washington State since 1989. He is currently employed by the Stratum Group as an Engineering Geologist in Bellingham, WA. Dan writes a geology blog (http://washingtonlandscape.blogspot.com) that provided some early information about the Oso Landslide to the general public as well as geologists not familiar with the specific area.