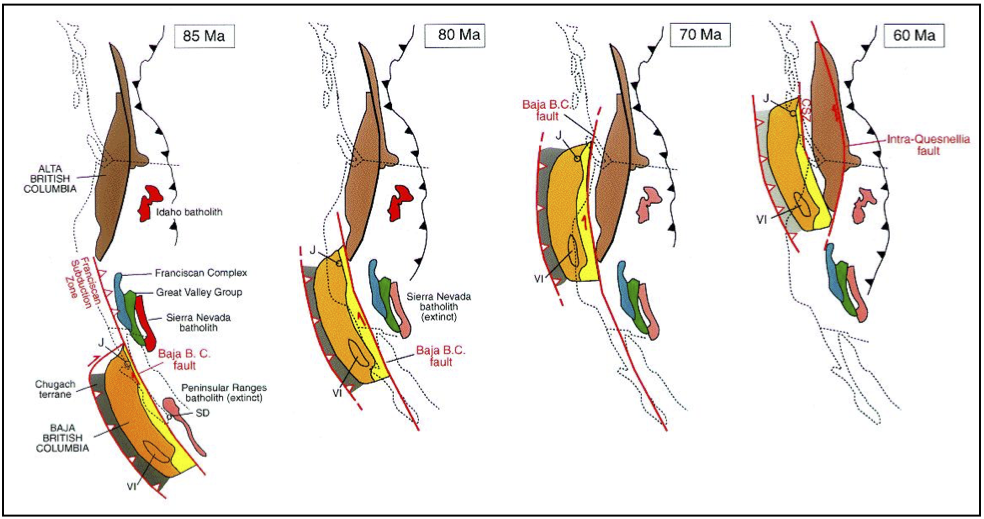 Two hundred million years ago, the west coast was where Spokane is now. This was the edge of the craton—the old part of the continent. How did the rest of the Pacific Northwest come to be here and where did it come from?

The west coast became an active plate boundary when an oceanic plate started to subduct beneath it. As the oceanic plate subducted, blocks of crust that it carried, such as island arcs or oceanic plateaus, were scraped off and added to the edge of the continent in a process known as accretion, thus building the Pacific Northwest we know it today. Accreted terranes have a different geologic history than the bodies of rock adjacent to them and are separated from their surroundings by major faults. The Crescent Formation of the Quimper Peninsula, for example, is part of a large accreted terrane that underlies much of the coastal Pacific Northwest. The Crescent Terrane originated as piles of basalt which erupted from the sea floor and in some places built broad oceanic islands. This basalt, along with oceanic sediment, was then shoved against and accreted to the continent. Deep thrust faults separate the Crescent Terrane from terranes that had accreted earlier to the Pacific Northwest. Subsequently, the younger oceanic crust has been added seaward of the Crescent Terrane. Each piece of accreted crust is separated from the others by thrust faults, and the subduction zone continues to shift westward as younger terranes are added to the edge of the continent.

Ralph Dawes is originally from Edmonds, WA. He has a degree in literature from Antioch College in Yellow Springs, OH, and degrees in geology from WWU (BS) and the UW (MS, Ph.D.). He has taught geology for the past 23 years, the last 16 at Wenatchee Valley College. He is passionate about sharing how the geologic history of the Pacific Northwest gives insight into the landslides, floods, volcanic eruptions, and earthquakes of today.